Jabots. History of the most ordinary things 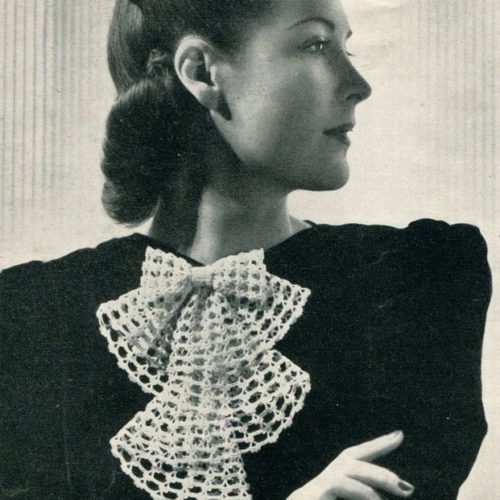 In French, jabot literally means a bird’s crop. Jabot is a special decoration on a blouse, being a frill made of fabric or lace, descending from the neckline.  Jabots were originally worn in Europe in the 17th century.  And, generally, it was part of a man’s costume.  Shirts with lacy cuffs and very high jabots were part of men’s couture at the time.

While in France the jabot was an element of a man’s costume, in Spain it escaped distinction of sex.  Jabots were worn both by men and by young noble women.  Although ladies at times wore dresses like military uniform, they wore blouses with jabots underneath.

By the way, thanks to this feature, a short goatee beard with a thin moustache emerged in Spain called an espagnole. How are they connected?  The answer is very simple.  It was absolutely impossible to wear a jabot and a long beard at the same time.  Having said that, wearing a goatee wasn’t convenient either.  That’s when they started making special holes in the jabot to accommodate a sharp beard.

Jabots moved into ladies’ fashion in the 19th century.  English and French ladies started wearing it with ball gowns.  In time, jabots moved from the ball gown to the ladies’ suit, and became an attribute of a businesswoman.  A jabot was worn with a blouse buttoned up to the neck.

It is believed that the return of the jabot to modern fashion happened thanks to German designer Karl Lagerfeld who began using it again in his collections.  And not only in combination with strict business suits, but also with elegant dresses. And in the present time, the jabot has moved from shirts and blouses to outer wear, such as raincoats.